There is some confusion in online video game communities about how probability works, particularly in regard to item drop chances. This seems to happen wherever players have a very low chance of obtaining something they want, and are willing to play through content repeatedly to obtain it. I’ve noticed this in Path of Exile with the Labyrinth enchantments, where there are 362 possible helmet enchantments, each with an equal probability of occuring (or a 1/362 chance of any particular enchantment occuring). This also happens in World of Warcraft (WoW), where many of the highly prized mounts have a 0.5-4% chance of dropping in a dungeon or raid playthrough.

If we had a WoW mount with a 1% chance of dropping, it is tempting to say that we simply need to run the dungeon 100 times to have a 100% chance of obtaining the mount. Many people think of probability this way, and are disappointed when it takes them many more runs through the content to finally get what they’re looking for. If the chance of something happening is 1%, or 1/100, this doesn’t guarantee that it will happen to a particular player after 100 trials. Rather, it follows the law of large numbers. Player A might find the mount after a single run, Player B after 35 runs, Player C after 500 runs, but on average, over tens or hundreds of thousands of runs, the mount will be found about once in every hundred runs.

So, how do we find our actual likelihood of finding an item (or, outcome) over a number of runs (or, trials)? I will use Deathcharger’s Reins in WoW to demonstrate. Deathcharger’s Reins is an item that drops off Baron Rivendare, the final boss of the Stratholme dungeon, and awards the ‘Rivendare’s Deathcharger’ mount. Although now owned by about 20% of players, this mount was once highly sought-after as it was the only means Alliance players had to ride an undead horse, and there are plenty of mount-collectors still looking for it. Finding this mount can be frustrating because, according to Wowhead, it drops about 0.8% of the time (or, a probability of 0.008).

Rivendare’s Deathcharger in action, being ridden by an Alliance night elf player. Image courtesy of Wowhead.

Now, it is tempting to go for the pitfall earlier where we sum the individual probability of each run. Our equation would look something like this:

What if we try multiplying our probabilities? Probabilities are often multiplied when comparing events or trials. For instance, the probability of flipping a coin twice and landing on heads both times is the product of the probability of landing heads on each flip, or 0.5 * 0.5 = 0.25. Our equation would look something like this:

Our total probability is P, our probability of success for a run is p, and we have n number of runs.

If we try this over a small number of runs, we come up with another problem:

The binomial distribution describes the possibility of a given number of successes, rather than just one success. It’s certainly possible for us to find the Deathcharger’s Reins more than once over 125 runs. Personally I’ve seen the mount drop twice within 100 runs, and have seen other rare mounts drop in quick succession. When we found the probability of success over 125 attempts (63.4%), we were really finding the cumulative probability of having at least one success via the binomial distribution.

We can use the R language to find and graph our probabilities without too much trouble. Even though the math is fairly simple, it’s much easier and quicker to have a computer do it than to calculate by hand.

This outputs ‘0.633597’, the same value (rounded to fewer digits) that we calculated by hand earlier. If we want to specify multiple values of k, we can do so, and R will give us each individual value. Here, we find the probability of finding exactly 1, 2, 3… up to 7 mounts in 125 runs.

Note that the sum of the outputted values is ‘0.6335883973’, very close to the ‘0.633597’ value outputted by the previous chunk of code, and to the value we calculated by hand. We could specify greater values of k, but the probabilities become so small there’s no point in outputting them all. Instead, we can have R sum them for us and not worry about it. Note: this returns the same result as 1 - dbinom(0, 125, 0.008):

So again, our output is ‘0.633597’. A typical player running Stratholme 125 has a 0.634 probability, or 63.4% chance, of having the Deathcharger’s Reins drop. Now, this is fine and all, but visualizing our data can help us understand a lot more about it a lot quicker than a summed range, or heaven forbid a table of potentially hundreds of probabilities for values of k. We can use ggplot2, a visualization package (and part of the Tidyverse group of packages), to help make things more understandable. The following graphs also use theme_partywhale, a simple but clean modification of ggplot2’s theme_grey theme.

Setting y to our dbinom() probabilities, and x to the k values we want, the code for a quick binomial probability mass function is as follows:

Which gives us the following graph: 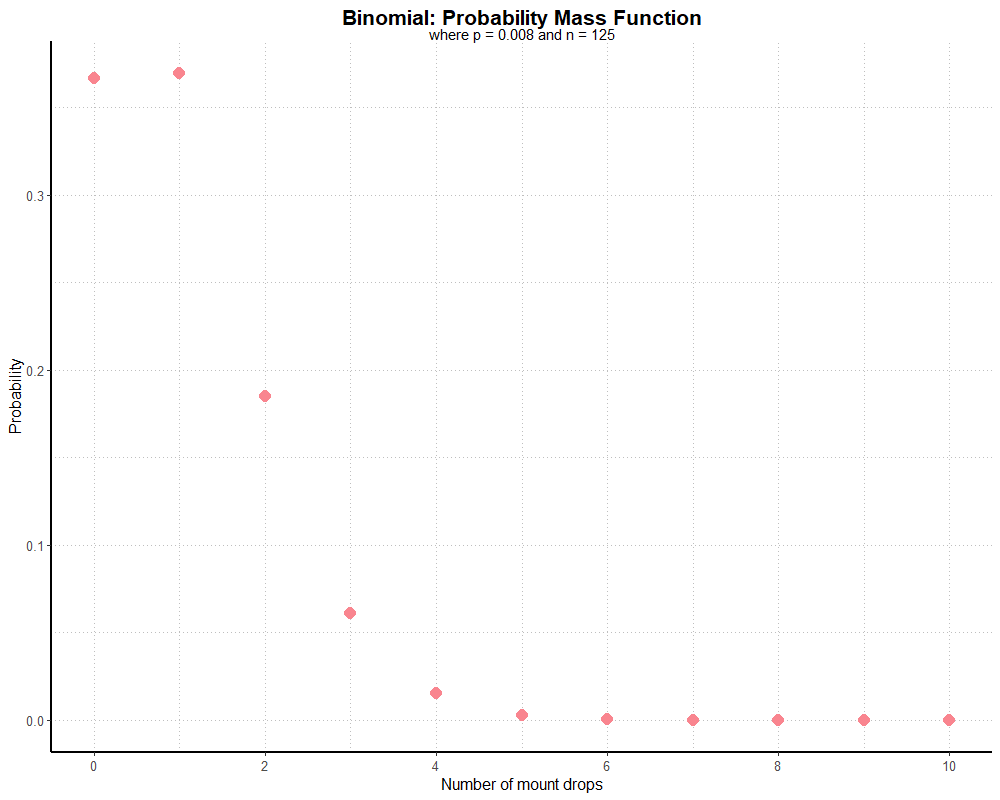 And the code for our plot:

Which gives the following graph: 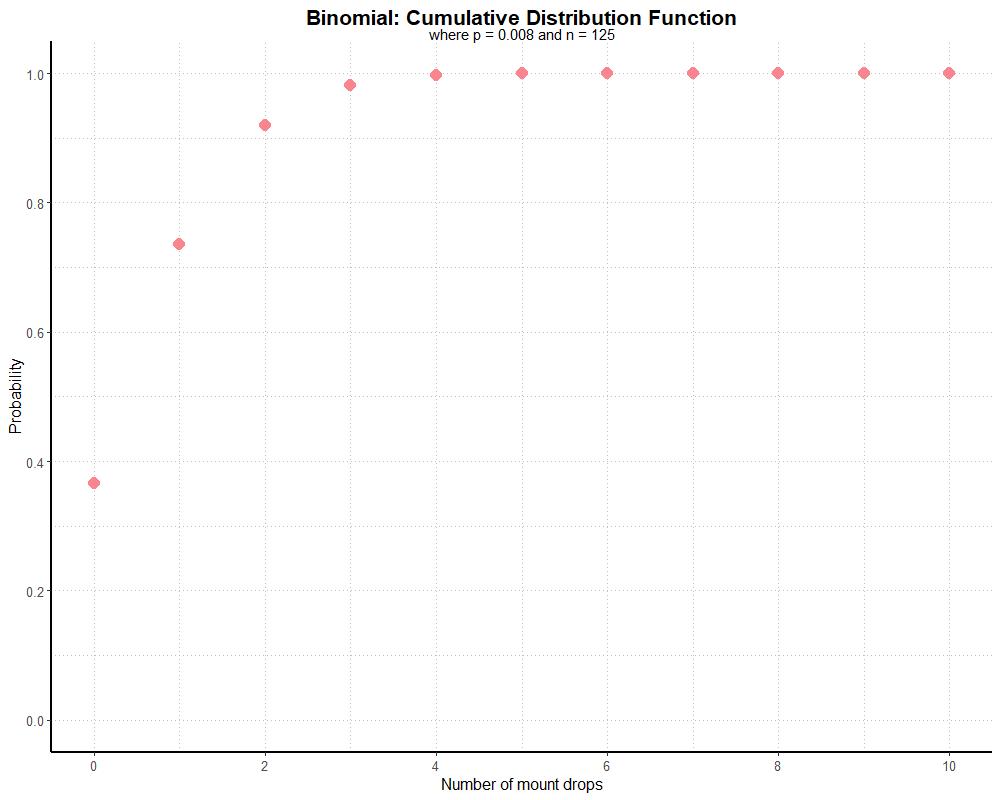 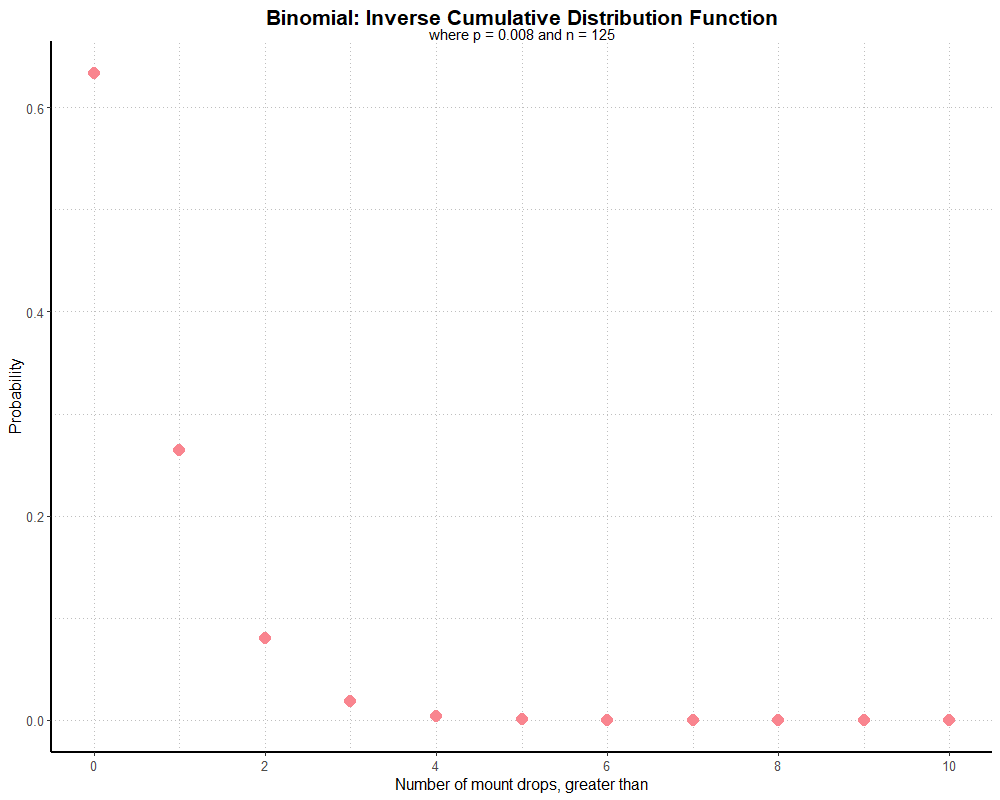 Here, the probability that we will find greater than 0 mounts (or, 1+ mounts) is just over 0.6, or 0.633597 to be exact. The probability that we will find greater than 1 mount (or, 2+ mounts) looks to be around 0.27, and so on. This graph is still a little clunky, and we would want to fix the labels (particularly on the x-axis) to make interpreting it a little easier. But, ultimately, with a little polishing this is information we can show anyone and be (reasonably) understood without having to explain a binomial distribution.

Next we’ll use simulations to test our perfect, or ‘theoretical’, binomial distributions, and take a look at the expected number of failures before a successful mount drop using the geometric distribution. But for now, this post is long enough!